August 02, 2011
Crawl/Child was a music group in the early 90s based in the Lindsay, Ontario area. Crawl/Child is difficult to describe but 'industrial' and 'metal' come to mind. They are probably one of the heaviest bands I've ever heard. The two main members of Crawl/Child were Howard Gibbs (electronics, sampling, etc.) and Bradley Park (vocals). As far as I know, Gibbs is part owner of Have You Seen, a DVD rental store in Peterborough Ontario and Park is teaching philosophy in Maryland.

Since their music isn't on Youtube and there doesn't seem to be any download links available, I thought I'd upload their two albums. In each zip file, there are also scans of the album artwork and words. 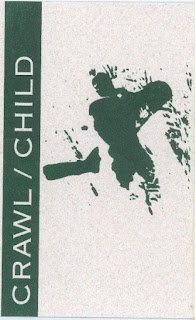 This was only ever released on cassette. I recorded my copy as 320kbs mp3s.
DOWNLOAD 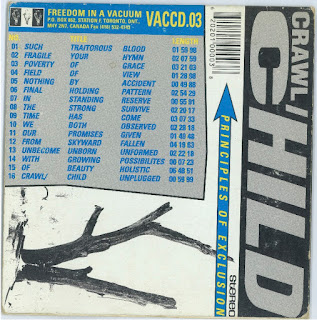 I ripped the CD and included are scans of the CD cover and the enclosed lyric sheet.
DOWNLOAD

Brad Park was also in a band similar to Crawl/Child around the same time called Scald with Paul Pfeiffer (who was musically known as Wadge). I have the old Scald cassette - if there's interest, I'll record and post it too.

---
edit:
Just came to my attention that Crawl/Child has a channel/page on last.fm. Requires login so I don't know what's there.