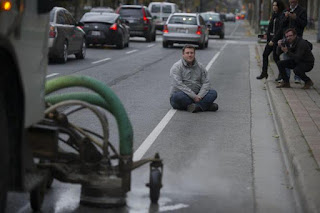 Those who paid attention to the last Public Works and Infrastructure Committee meeting (June 23 2011), or the news, will know that at the last minute John Parker pulled a nasty stunt. He surprised everyone by introducing a recommendation ("carried"/ approved) to remove the recently installed bike lanes on Jarvis. This still has to be approved by Council on July 12 or 13. Many of those in favour of removing these lanes often point to Sherbourne Street - "take Sherbourne instead." Sherbourne is one block west of Jarvis and has had bike lanes for quite a while. For example, here, here and here. Indeed, at that PWIC meeting, it was recommended that the city "proceed with the process" of installing separated bike lanes "in 2012 in conjunction with the planned capital work on Sherbourne Street." See Section 1.c.


Sherbourne Street is a total mess. It's so bumpy and pot-holed that it's not just 'comfort' but safety is a major concern. Anyone who has ever ridden a bike in Toronto knows that taking Sherbourne is a bad idea. Most 'off road' trails are smoother. I once took the Sherbourne lanes and had to readjust my headset and front brake.


But does anyone have any details or plans or anything about this supposed "planned capital work on Sherbourne Street"? I posed this question to 311Toronto and the Ward's Councillor Kristyn Wong-Tam, both of whom were a bit surprised. Wong-Tam eventually replied that "There are no conceptual drawings or even public consultations yet for Sherbourne." 311Toronto seemed at first to have no idea, but have since found something and promised they will send it to me tomorrow.


I'll update this post once I get those details.


But, for now, I'd like to remind those who are in favour of bike lanes that this whole 'just take Sherbourne, it's getting redone next year' is a bit of a sham. Have you seen any plans? Have there been the usual public consultations?


And, the Sherbourne bike lanes go all the way to the lake; the Jarvis lanes suddenly crap-out and leave cyclists stranded. If I had to pick one or the other, I'd choose Sherbourne.


Finally, it would be an interesting (perhaps cruel) experiment to see how the two streets fare, one with car and bike lanes, the other pretty much a highway. Which streets will see 'life,' property values rise... which will be desirable? Perhaps if we leave the Jarvis lanes, fix up Sherbourne, there will be a push to "Sherbournize" Jarvis.


----
Update (July 9)
Someone named 'Trish' at 311Toronto found something. On July 6, she wrote to me:
"the 2011 Transportation Capital Works Program outlines major road reconstruction work for Lower Sherbourne Street this year.

To find out more about plans for Sherbourne Street in 2012, contact Mark Berkovitz, Senior Engineer, Infrastructure Asset Management & Programming, Transportation Services, at416.338.5377, or mberkov@toronto.ca. He should be able to provide the information you're seeking."

So, I wrote to Mark Berkovitz (on July 6) and asked him if he could provide any details on this "already planned" work on Sherbourne.

So far, I've heard nothing back.