City Limits: how we avoid the problem of the city

November 28, 2010
Here is an article I wrote and was recently published in an arts magazine, One Hour Empire.
As it appears in the magazine: 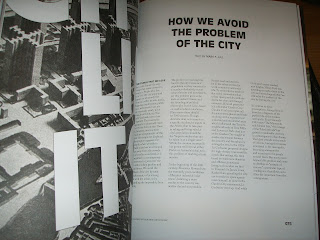 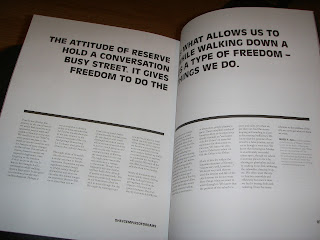 The magazine can be purchased at The Museum of Contemporary Canadian Art at 952 Queen Street West, Toronto, Ontario or (possibly) at various Book City locations across Toronto. If you can't get to these locations and would like to purchase a copy, let me know and I can mail one to you.

Full citation:
“City Limits: How We Avoid the Problem of the City,” One Hour Empire Vol. 1, Issue 3.


City Limits: How We Avoid the Problem of the City

The things we love about the city are the very things that make us want to escape the city. People who live in or visit the city enjoy and depend on what only the urban can offer: its arts, music, shopping, employment, public space, restaurants, bars, etc. But eventually nearly all of us reach our limit, cry “too much!” and seek some form of reprieve. The reasonable response is to physically leave the city for the country. There are, however, many actions which are symptomatic of this desire for escape but displaced. This symptom appears, for example, when we seek to seclude ourselves in a tranquil space away from the crowds. This symptom appears on a broader social level, exemplified in contemporary movements to ‘grow over’ the city with roof-top gardens and urban farms. We avoid the problem of the city by total abandonment or escape, by mixing rural with the urban, or demanding the impossible from the city.

The problem of marking the limit to the city in size and population is a key concern for a number of relatively recent urban theories and movements, yet this problem goes as far back as ancient Greece and the founding of political philosophy. In the Laws, Plato, based on mathematical calculation, states there should be 5040 citizens. Though Aristotle does not commit to a specific number, in the Politics he argues that to take part in ruling and being ruled, a city’s population should be the “largest number that can be taken in at a single view.” While the modern metropolis has grown well beyond either Plato’s or Aristotle’s ideal polis, this problem of marking a limit to the city remains.

At the beginning of the 20th century, Ebenezer Howard saw the extremely poor conditions of Britain’s industrial ‘coke-towns’ though believed a mass exodus to the country was neither desired nor possible – people need and want to be in the urban centres for work, commerce and social life. To reconcile the need for the social connections that urban space provides with the desire for clean and tranquil existence, he presented his influential ‘Garden City.’ Garden City principles call for many trees, plants and fresh air along with a separation of industrial and residential areas, which influenced the Toronto neighbourhoods of Don Mills and Lawrence Park. And just as the Garden City sought to resolve the tension between the country and the urban by mixing the two, in the 1920s Le Corbusier proposed designs for high-density towers within a park-like setting, this time based on maximum densities and efficient, functional living, such as what we find in Toronto’s St. James Town. Instead of spreading the city out to make its space appear more ‘natural’ as done in the Garden City movement, Le Corbusier went up. During the height of Le Corbusier’s career, Henry Ford was unwilling to mark a limit to the city and instead argued that “we will solve the problem of the city by leaving the city.”

In contrast to these proscriptions, Georg Simmel provides a diagnosis of the psychic life of the modern metropolis. From Simmel’s 1903 essay “The Metropolis and Mental Life,” the concept of the “blasé attitude” has gained considerable currency in contemporary urban theory. The blasé attitude is an affect in which citizens, having their senses inundated in the metropolis, become unresponsive and uncaring to the people around them. But many move beyond this blasé attitude and come to develop an “attitude of reserve”: a particular type of “intelligence” that allows us to filter the important from the unimportant.

If we do not develop the blasé attitude or the attitude of reserve we would find ourselves in an oppressive psychic state and unable to function in the city. We would try to say “hello” to every person we pass on the street or involve ourselves with the business of every stranger on the subway. The attitude of reserve, however, ensures we respond to legitimate cries of distress and to situations or events that have a serious significance. The attitude of reserve gives us the freedom to be as we are in the city. It lets us, for example, hold a conversation while walking down a busy street. It also gives us a freedom from the city’s endless demands. Perhaps it was an inability to develop either of these attitudes that led Ford to see abandonment as the only solution to the chaotic messiness of the city. And perhaps Howard and Le Corbusier don’t give the urban dweller the credit we deserve.

We might think of Simmel’s attitude of reserve as having a similar structure to Freud’s repression. Repression requires significant mental energy to keep thoughts and actions repressed, and when we can relax this mental energy, we experience pleasure. But more often than not, we reveal our repressed desires unintentionally. Similarly, even the city-dweller with a well-developed attitude of reserve will at various times feel there is just “too much” going on and wish to ease this constant mental function of filtering the many stimuli in the city. They might, quite reasonably, seek pleasure at a cottage in the woods. Though more frequently this city-dweller will lose hold of the attitude of reserve unintentionally. This becomes particularly apparent in our “frustrations” when we seek to move through the city. We might be wanting to get to a particular place or event in the city, which can only exist or occur because of the density of the city, but we become annoyed with this density as we try to get there, be it that we’re stuck in backed-up traffic, a crowded subway or streetcar, or a sidewalk too bustling to walk quickly. We want all the city offers, but then dream of isolation when we’re moving.

Nearly all discussions about transit (public transit, driving, cycling, walking) focus on “getting from A to B” at the expense of the time and space between “A and B.” The city’s density “frustrates” this efficient movement almost as though the city is asking you to slow down and see it, enjoy it. Cavernous subway lines and the attention demanded of the car driver do not allow one to enjoy the ride, even though this is often its promise: car marketing has everything to do with enjoying the ride, depicting utopic spaces with no other cars, lush forests, all the while moving quickly and efficiently. Moving by bicycle, foot or streetcar gives us much more opportunity to witness, enjoy and participate in the life of the city. These latter modes of transport allow us to watch the random scenes of daily life: someone locking up their bike, a conversation or altercation, or people playing a game. These enjoyable modes of transport allow us to experience alterity through an “encounter with the Other,” an essential experience for democracy to function. We learn our own limit to Otherness: when we feel the Other is too Other.

Much of this fits within the Lacanian structure of fantasy: “I know very well, however…” We know very well that we need the density and life of the city, however we do not want these things when we want to move through it. We know that the promise of the suburbs is quiet and calm, yet when we get there we find the streets looping and winding in a just-as-frustrating inefficiency. We know that the promise of car travel is a false promise, yet we act as though it were true. We know that Kensington Market is an extremely successful urban space, though we submit numerous plans to “fix” it by altering its physicality and use by making it car-free, widening the sidewalks, cleaning it up, etc. We often want the city to function smoothly and efficiently but once it does we find the city boring, drab, and isolating. From the many solutions to the “problem of the city,” we never get what we think we want.